The Individual event of the World Junior Championships continued today. The posts have been slow the last few days because we are busy and the wifi isn't great in most places.

It was an ugly day outside. Tons of rain and wind kept everyone inside the buildings. Just as well as some amazing squash was happening here at Squash Time with semi finals taking place. Semi Final Day for the main round saw 4 Egyptians girls facing off against each other.

I had my third match of the tournament against the German Nele Hatschek. The German started strong and took full advantage of some loose balls and won the first two games 11-8. However, I was able to win the third game by the same score, 11-8. In the fourth game, the German seemed to be favouring a leg and was really challenged to move when I sent her into the front corners. I took the fourth game 11-6.  In the fifth, it was quite obvious that Nele was not playing the way she could, and again, I was able to take full advantage and won the fifth 11-4 to move into the semi final of the plate.

Chloe played her first match of the day against Swiss Céline Walser. Chloe was hitting it with good authority and sending her deep and won 11-5. In the second game, Céline started to challenge and take advantage of some of Chloe’s decision making, but Chloe was able to hold her and win 11-7.  Chloe went into the third with confidence and won it decisively 11-3.

I had to play a tough opponent in the Semi's, Tinne Gilis from Belgium, the 5/8 seed.  I lost the first two games 3-11, 5-11. I was up 8-5 in the third game and the momentum seemed be to shifting, but then the experience of the European came through and Tinne won the next 6 points to take the final game 11-8.

We stayed at the club almost all day. Because there wasn't enough time to go back to the hotel in between our matches. There isn't a lot to do around the club because it's on the opposite side of town than the hotel.

We watched the Semi Final matches. The 4 Egyptian girls are all so close in playing level that it is anyone's game really. It is a lot different than any other junior squash match that you would see in BC. It takes twice as long as an average match because there are so many lets and strokes. It is also a lot more rough. Habiba Mohamed (#1 seed) beat Salma Hany Ibrahim (3/4 seed) in a super close 5 setter. Salma was up 10-6 in the 5th game and Habiba came back to win 14-12. Habiba won 3-2 in just under 90 minutes. The other semi final was just as exciting, Nouran Gohar (#2 seed) beat Mariam Metwally (3/4 seed) in 4 games. 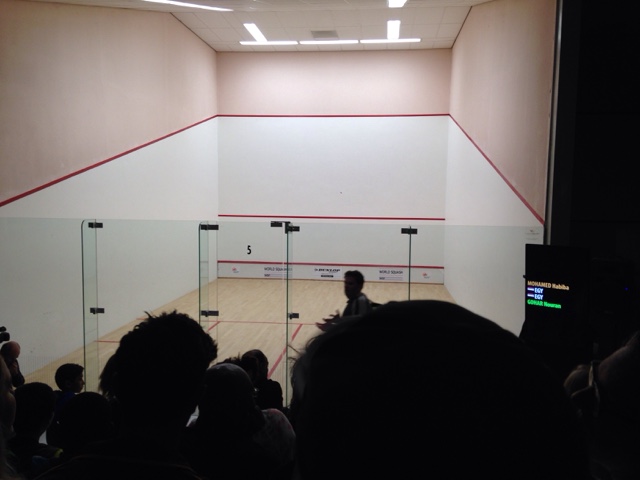 Behind the show court

Tomorrow is finals of the individual Competiton and team competition starts on Friday, the 31st.